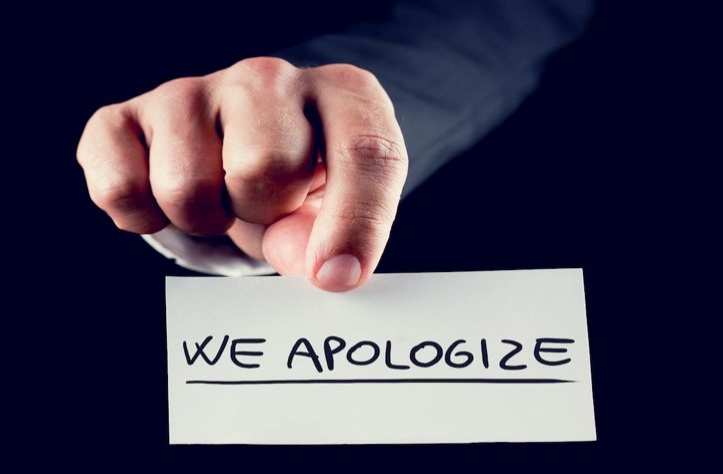 I heard His voice very loudly and very clearly. He said, “I do not change my mind, and I make no mistakes. I am FED UP with my prophets apologizing for their prophetic words. I did not tell them to apologize. Will I not keep the promises I make? Am I not capable of moving out of the way whatever steps in front of me? I WILL keep my promises because I have not changed my mind. I am looking for those who will believe me and declare what they hear without feeling the pressure to explain or apologize for what they don’t understand. I will have an army that will obey me quickly and remain in obedience to my command.”

This took place about a week ago in my kitchen. I was getting a cup of coffee and the Spirit of the Lord came upon me all of a sudden. His presence was so heavy that my heart was racing and I was panting! I have heard the Lord speak to me on many occasions over the years, but this was the first time He came upon me so suddenly and that fervently. If I would’ve been near a microphone, anyone’s microphone, I would’ve grabbed it and yelled this word. It was that powerful.

I’ve never apologized for a prophetic word that I’ve given, so the word wasn’t directed at me – it was simply His response to what’s been happening to some of His prophets. Undoubtedly, those prophets who have apologized for their prophecy of Trump’s 2nd term felt the pressure by many who questioned their accuracy. People who have large ministries can sometimes feel the financial pressure when support begins to shrink, and so they may feel the need to compromise by apologizing. I understand their difficult situation, but I also understand how we must let go of those pressures and trust the Lord no matter the costs. God will give us a word sometimes that makes no sense at all or it still hasn’t come to pass after many years. I’ve experienced both of those scenarios, but that is not our signal that we got it wrong or that the person who gave it got it wrong. I’ve even heard one person instruct others to toss those prophetic words if they haven’t come to pass within 5 years! The Lord already knows when that word will come to pass and it builds our faith and trust in Him if we will continue to hang onto it and go to war with it. This is not a message about how Trump is coming back into office, but I am saying that He is certainly capable of making that happen regardless of what looks obvious to the rest of us. He is not limited to time and circumstance.

Faith is required by both the prophet and the receiver of a prophetic word. Perhaps this has been a test for all of us to truly hear for ourselves what the Lord is saying to us. With the visceral collective response I’ve read about concerning the Trump prophecy, it shows me that people are having trouble in trusting God. They’d rather depend on someone else to reassure them because they’re infected with fear. So, their response to those prophets have opened an understanding of what’s really going on with them – they’re not as mad about the prophets supposedly getting it wrong as they are about feeling cheated with a false hope…you didn’t get rid of my fear for me and I was counting on you. Each person will need to lay those fears at the feet of Jesus and confess fear as a sin, a spirit that has robbed them of faith.

Recently there has been discussion about accountability among the prophets. Personally, I’m convinced that a minister is making a mistake by submitting to everyone who hears him speak. Everyone has a difference of opinion about someone else’s ministry. However, each minister should be aligned with just a handful of other ministers who will carefully consider what is scripturally correct and how we each may mature and advance in our callings. We call this alignment, and each minister who is willfully aligned with others is wise to do so. People who aren’t knowledgeable of the Word of God can become very judgmental of those in ministry who disappoint them. The Apostle Paul instructed the Corinthians, “Let two or three prophets speak, and let the others judge” (1 Cor.14:29, NKJV). People can get the idea with some versions of the Bible that anyone can judge what prophets say, and their judgment can often consign that prophet to the list of false prophets, giving them a final conclusion to their ministry. The word judge here doesn’t mean to size them up and determine if they should continue as a prophet anymore. It means to discern, weigh, or evaluate what is being said, and that should be done by other prophets in that company of prophets. So, this scripture speaks to weighing what the prophet said and not weighing the prophet him/herself to determine if they should continue in ministry. Our gifts and callings are irrevocable (see Rom.11:29).

Let’s go back to giving a prophetic word that appears to be wrong. Paul told us he wished we would all prophesy, and so any one of us might find ourselves in a situation where we gave a prophetic word that seems to be in error. I do know this: if you want God to give you another word, then you had better give the last word He gave you, or else He might not give you any more of those (He warned me about that once). And then, if people come to you and ask you to explain that word, explain what God meant, or any other question, tell them “I don’t know,” unless He explicitly gave you an explanation. We don’t have to come up with an explanation – we just simply need to deliver what He gave us to deliver, period.

In addition, there may be some who misuse the scripture in 1 Cor. 14:32 which says, “…the spirits of prophets are subject to the prophets” (NASB), in order to push accountability upon those who give prophetic words. The context of that scripture is such that Paul, after he explained that anyone speaking should be quiet when the Lord gives someone else in the room a revelation, was stressing the importance of self-control when it comes to speaking so that there would be no discord or confusion. Another interpretation of that scripture would be “…that prophet is in control of what comes out of his mouth and when he can speak it.”

I am concerned that because of the apologies of certain prophets there may be a serious hesitation to give any more words. That would be a mistake. This is not the time to shed the prophetic mantle; now more than ever, we must serve faithfully in whatever capacity to where God has called us. Then, we should leave the results up to Him!